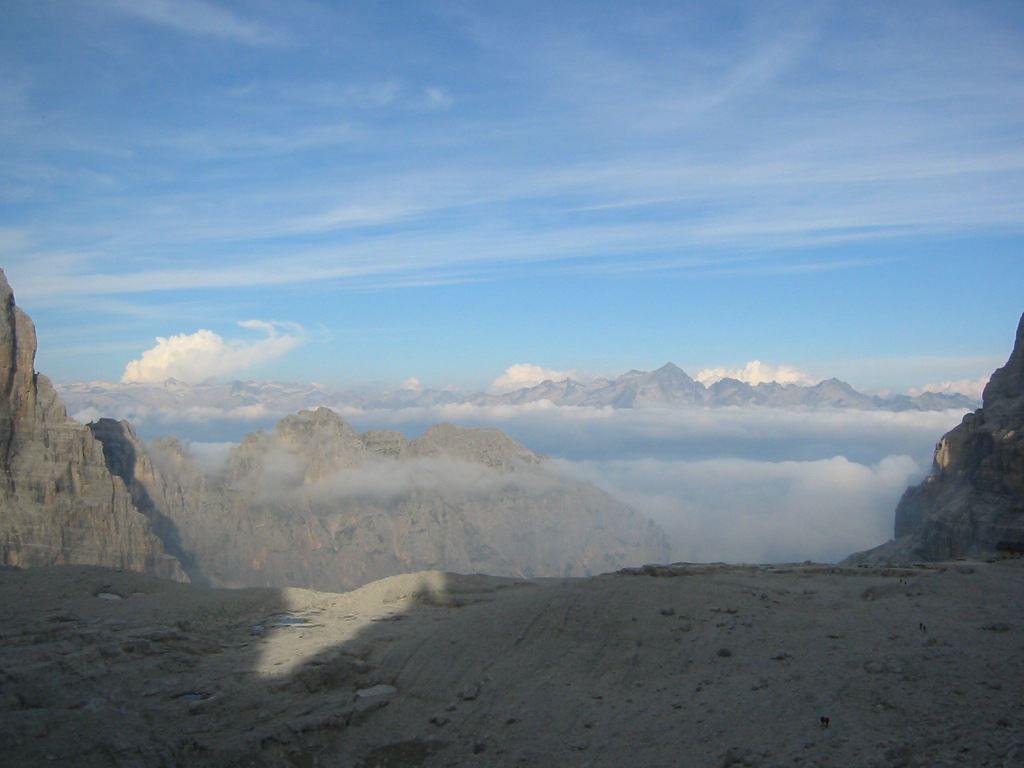 Next day on Saturday, August 23 I opened my eyes at 6:40AM, and sun already appeared through the mountains. I climb down from my bunk and ventured outside to record this strange moon-like surface that we missed to photograph 4 year ago.

After a very dull breakfast and final pay (72€ for food, shower and lodging for two) we started back out at 8AM.

First 4 hours we should be climbing up back to Vie Ferrate, going at the top of the mountains and climbing down to next Refugio Pedrotti.  Sky seemed clear, perfect temperature and plenty of visibility.  Backpacks had much less food and clothes in them and they seemed weightless.

Our best shoots and video were probably taken during these first morning hours. Thanks God to gloves.  We did not use any safety harnesses or ropes, but we were constantly holding on to steel railing with either one or both hands.

Way ahead of schedule we reached Refugio Pedrotti around 11AM (2491m).  Here we ate lunch, we met out acquaintance Claudio, who still worked here as 4 years ago.  We successfully finished almost all of our remaining food, ordered soup and salads and tea.  We witness a laud gathering of many Poles vigorously discussing events of their expedition.  We spend here about an hour, but weather suddenly turned sour and cold.

We started to climb down, but had to hide under the rock for 2 hours from rain and cold.  Around 3:30PM we reached next Refugio (Rifugio Selvata 1630m) and now we where only 1:50 away from Molveno according to trail markers.

It is always very exciting to go down – “back home” even in a bad whether.  At this point all our worries were behind us and only new discoveries ahead.  We reached the car around 5PM.

Instead of pressing forward according to our schedule, we decided to stay in Molveno for one more night.  We returned back to our Babushka and Dedushka and for 38€ took almost the same room with a view to the city clock tower and the lake. 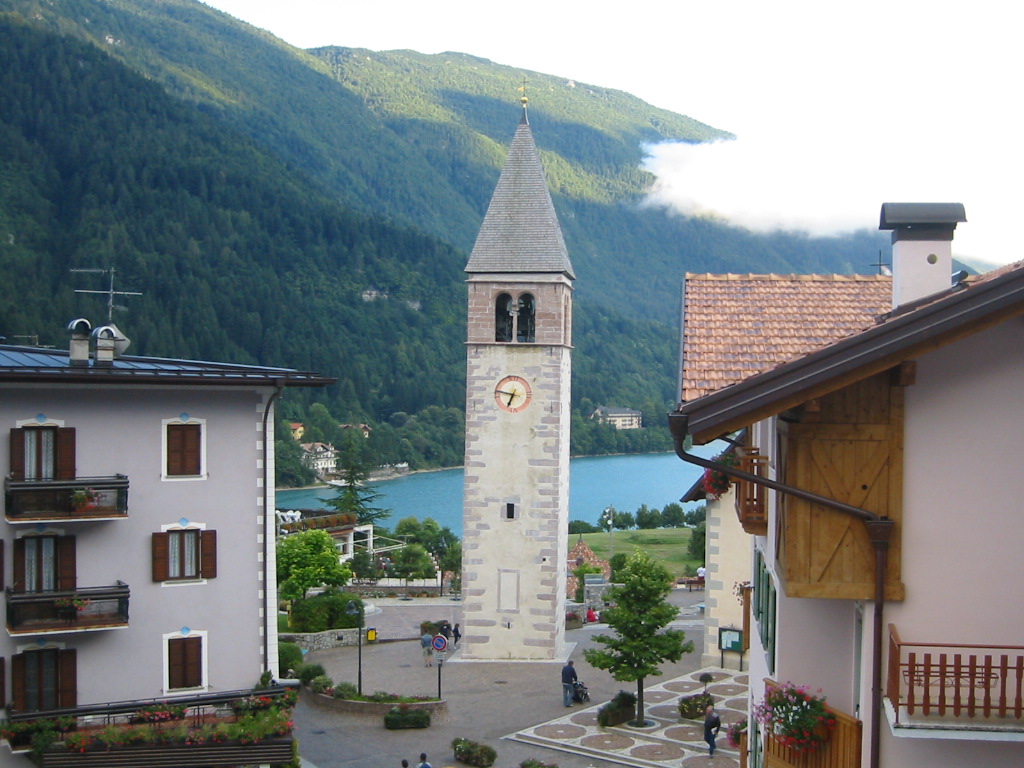 Both of us, we took a bath, in two bathtubs separated by low wall, set our photo- and video- batteries to recharge, and again went to restaurant Antica Bosnia, which apparently means old Bosnia.

At 9:30AM on Sunday, August 24 we continued our trip.  This time out target would be Verona, and Padua, and ultimately Venezia. We entered Verona around 1:30PM.  Without slightest clue and without any map we stumbled into Romeo and Juliet balcony.  This house belongs to Juliet’s family – Capuleti. The building dates from the 13th century and can be visited for 6€.

We circled entire city almost twice, had lunch and left for Padua around 5PM.  Our car flew 60KM in 40 minutes.  We got a little lost in Padua.  We could not quite found the city center.  Finally, we just parked in white zone (free parking) and found another Chinese hotel – Hotel Al Giardinetto –  near square Prato della Valle for 75€.  This is a very large wide open square with a lot of water and trees and fountains and sculptures.  And this is the only place we actually saw in Padua.

On Wednesday, August 25 we woke up in Bellagio in Albergo Giardinetto. We followed an interesting breakfast ritual here.  We bought croissants and fresh-cut cold cuts and thin sliced cheeses in the deli right on Via Garibaldi (MICHELE GILARDONI, Alimentari – Salumeria – Rosticceria, Via Bellosio,1) , but we got our […]

Friday, August 22 – From Molveno to Rifugio Alimonta Next morning on Friday, August 22 we were ready with provisions and maps. We were ready to start our ascend.  We parked the car at the end of Via Rio Massò, packed our backpacks and started at 8:53AM.  Our breakfast was […]

Finally, on Saturday, August 21, 2010 it was time to take our first hike into the mountains. Back in Boston I picked a path going up towards Monte Bianco (Italian) from Italian side. It was a day trip starting from 1,500m parking lot and going as high as 2,590m at […]