WHITEs reached their highest point at 10:09 (6:2), when Boris R, Cüneyt and Kevin scored 6 good solid goals.  They had an extra player (Denis G.), but DARKs refused to take him to equalize the teams.  They thought that they are much stronger.  And they were.

After that goals begin to pile up quickly.  At 10:30 Serezha scored a very convincing goal (8:7), and now it was just the matter of time before DARKs could start winning.

At 10:48 it finally happened.  Sasha L. was scoring a header, and Cüneyt manage to block the ball with his hand (penalty).  And Sasha scored a smashing penalty into the post just above Kevin‘s head (9:10 for DARKs).  An era of final agony has began. 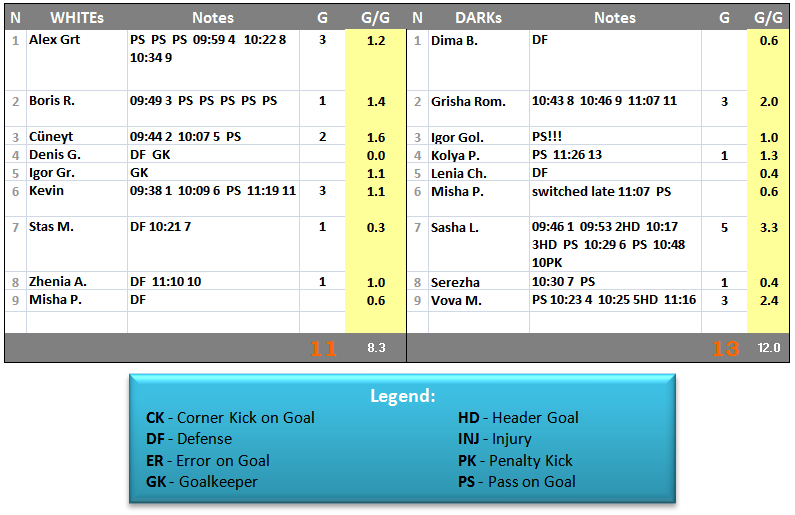 We now have to introduce a new little twist in the counting rules. “Team where player starts usually determines win or loose result.   Player, who switched and scored goal OR SUPPLIED a PASS-ON-GOAL for his (her) new team will be counted as winner or looser on that team.  So Misha P.  It means his result today counts along with DARKs.

Going forward to the end of Summer season, anyone with 8 games or more will be shown in the table bellow.  Here is a situation after 25 games: