Stas M. distributed all WHITEs players to their lines, and this “new order” stayed like this throughout the game.  It actually worked.  It worked well.

We had only enough people for one game. Teams quickly collected a complete 12 on 12 roaster.  But DAKRs where very formidable bunch: Ziya, and Zhenia V. and Pilip (not a spelling error).

However neither team could score a goal.  WHITEs had an amazing defense with Arnaud and Kolia N. (welcome back).  WHITEs moved forward Alex Z., Bobby, Vadim L. and Vlad U.  And they made their job done too.  Their style can be described as a very stable passing and a very high percentage of disappointments.

In comparison, DARKs had even worse luck.  Zhenia V. almost never hit the ball hard, and Ziya was covered by Alex F. and Oleg all the time.  Some attacks were almost certain goal.  Ball hit the post several time on one attack.  But nothing worked for them. 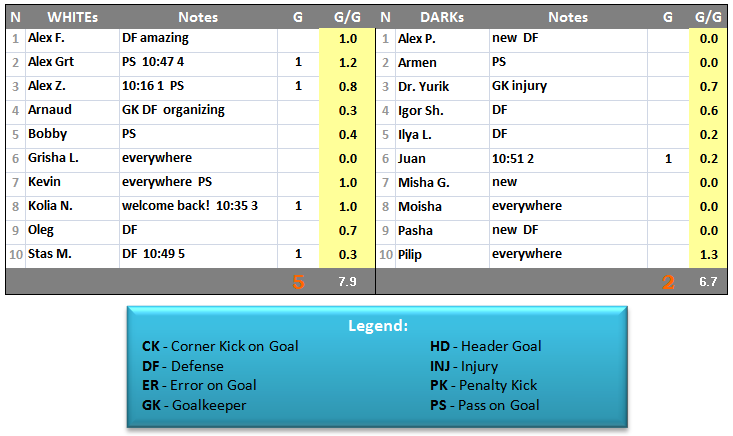 With only 4 games left in this season, there are at least 11 people with good chances to win this thing.  Only players with 8 games will qualify.