WHITEs kept the lead throughout the game, but we had huge time gaps between goals.

I never seen such a big difference in total Goals-per-Game  Total for each team. 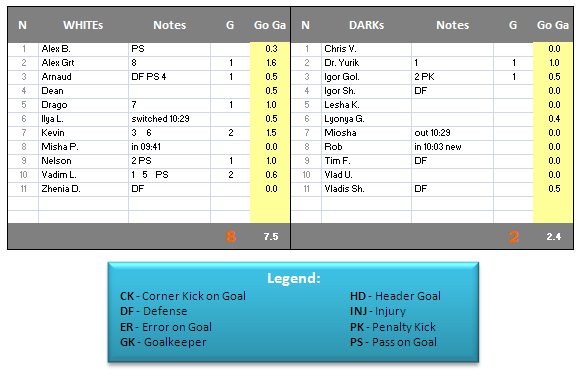 For those who stayed for a second game – it was a real treat.  We played 7 on 7 and Dean scored 3 goals from every position imaginable and gave memorable passes. Lyonya G. scored an excellent penalty  after an assault on Igor Gol.  This game lasted so long, that we out-played even people from parallel club.  We stuck on 4:2 for WHITEs, and decided to play till last goal – very dangerous way of thinking.   Finally, finally, at 11:53 Drago saved the day with a tricky shot in to the very corner – 5:2 for WHITEs.

Look at a father and son team near the top of the ladder after 5 games: