In today’s difficult world, the soccer field is a place of calm, a place of sorrow.  It is our sanctuary.  And today this sanctuary was visited by (wait for it…)  30 people!

Kolya opened for DARKs (0:1) and goalkeeper followed the ball into the net with his eyes.  But WHITEs followed up with a series of generous passes and fantastic goals.

At 8:2 6 people joined in from our Secondary game.  Game continued 11 on 11.  Let’s especially praise a heroic Georgi and Josh, who entered with not much hope on their side.

DARKs had occasional bright splashes,  and one is in particular memorable.   Vladis Sh. from another half of the field sends a curved ball for someone, but goalkeeper (Yakov) is conversing with Yura D. and everyone was amazed to see a goal (8:3 -10:55).  Each of these bright splashes couldd have been a rally point, but none did. 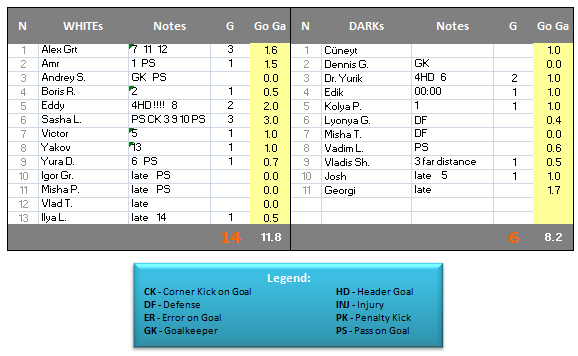 As you can see in the table to the right, distance between top and bottom is 6 points after first 4 games.