If only you could control names of directories, where Microsoft installs Windows, Data and Program Files.

If you could, you  would be able to  install multiple instances of operating system on the same drive.  So. let’s do it anyway.  To do that you need two parallel installs of you favorite operating system on the same computer.  For now it has to be on 2 different drives.   You need this so you can manipulate locked files and directories of one install, while booting into the other one. 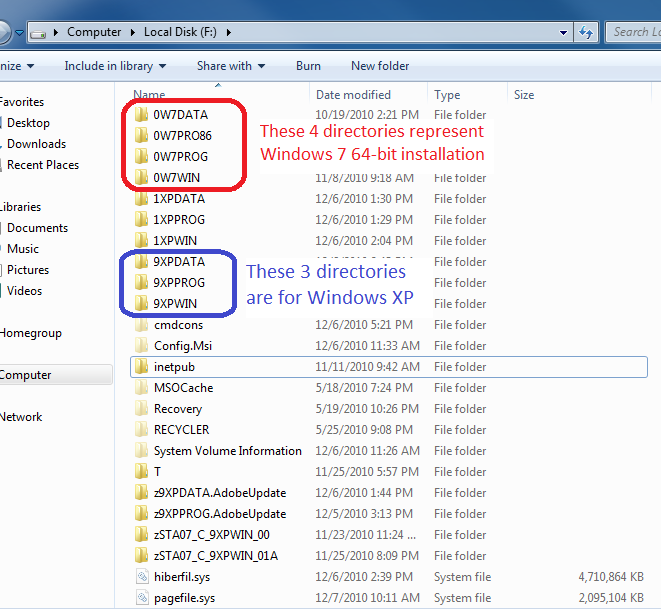 This article applies to any Microsoft operating system, and uses the most complicated Windows 7 64-bit as an example.  This method was also tested and works brilliantly on Windows 2008 R2 Server.

This is a highly advanced and technical matter. To follow topics discussed here, reader is expected to be well versed in File and Registry manipulations.

All mistakes you make, are your mistakes.  Proceed with caution. Backup profusely. Method described here provided “as-is”, without any guarantees or assurances.

You just installed a fresh crisp instance of Windows 7 (or XP, or W2K8 Server).  You can only login into the instance, but you didn’t instal any applications, or made any customizations.

[2013-02-24 SU 22:24]
This technique was tested twice with Windows 8 x64 Pro.  A smashing success was achieved, when I was able to catch a brand new install clean after a second restart, boot into a parallel Win7 instance and update all directories in registry.  When I tried to do it after Windows 8 complete the install, I could not make Start Tiles to work properly.  Everything else worked ok.

We are planing to perform these renames, moves and deletes:

Let’s start with the simplest task of actually renaming and moving the folders.  Do not get discouraged, if your changes don’t take hold.  You also need to delete files desktop.ini inside the folders that you are renaming (except for the Windows folder).

Now we need to manipulate registry files in our target install to update all hard-coded paths to point to new locations.

We will have to repeat this step for 6 registry files.  So, you need to understand, what are we up against here. Instead of this being a simple task of search and replace (like in Word document), our task is complicated by these factors:

(2) Registry Security.  You can’t easily write your updates back to Registry due to severe Registry security.

(3) Registry Format.  Some values are recorded in HEX and can’t be easily picked up by simple search and replace.  You need a serious and smart  Registry tool to do  the job right.

This section is already re-written and describes new, fast and automated way of doing the updates in SOFTWARE hive.

(01) Load SOFTWARE into Registry and name it QQQQ.

(02) Save QQQQ Registry security to a file with this command (Note: use elevated security CMD):

In 16 to 28 seconds you will get a 75-100MB text file “qq-software.txt” that contains all information about loaded registry hive security.

(03A) Take ownership of the entire QQQQ hive for Administrators (27 seconds on W2K8 R2):

Do not get discouraged, if you get an error message here.  Just repeat steps 3A and 3B till you get no errors.

(04) Only now we are ready to perform bulk updates of Registry values.  We are renaming old C:\Windows values into a new C:\1W7WIN and several others according to a table above.   I use a free and amazing third-party Registry Toolkit for Windows x64 Ver. 4.1 to do the mass updates.

Table above to the right is showing replacements that we need to do in a loaded QQQQ hive and corresponding replacement count that you might expect to perform.  Make sure you are doing your replacement in order shown in the table.

In W2K8 R2 there is not need for manual replacements.  but in any case double and triple check at this point.  Using regular RegEdit search QQQQ for any instances of C:\Wind, or C:\Prog, or C:\User and pay special attention to
HKEY_LOCAL_MACHINE\QQQQ\Microsoft\Windows NT\CurrentVersion\ProfileList:

While doing this one more time for a new install, I just caught an instance that somehow was not replaced either by me or by utility.  By checking and fixing the problem now, I saved many painful  minutes of troubleshooting and fixing down the road.  Image above demonstrates, why we have to search and replace not only C:\Users, but also %\Users.
.

(06) Unload QQQQ hive from your Registry.

All this huge amount of work can be done in minutes instead of 2 hours using old semi-manual method.

Please note that in Windows 8 the replacement count is significantly higher, and you do not need to make manual adjustments.

(01) Load SYSTEM into Registry and name it QQQQ.

(02) Save QQQQ Registry security to a file with this command:

In 3 seconds you will get a 13MB text file “qq-system.txt” that contains all information about loaded registry hive.

(03A) Take ownership of the entire QQQQ hive for Administators:

and (03B) Give full rights for Administrators for all branches of QQQQ:

Manual tweaks for SYSTEM could include these exceptions

(06) Unload QQQQ hive from your Registry.

All this huge amount of work can be done in minutes instead of 2 hours using old semi-manual method.

Only few more files to go.

All 6 steps are exactly the same for a small DEFAULT file.  No replacements in this hive are required in Windows Server 2008 R2.

Table to the right shows searches and replacements that I had to on Windows 7 Enterprise x64.

Everything is exactly the same here and no manual updates are required.  Here are the commands:

This is a very small file (0.5MB), and you should have minimal problems with updating REG file and merging it back to the registry.

Do not forget to unload hive.  Only last 2 small files to update.
‘

No replacements are required for this file for Windows Server 2008 R2.

====  Make Your Replacements Here ====
Manual fixes are reguired here: NONE

No replacements are required for this file for Windows Server 2008 R2.

====  Make Your Replacements Here ====
Manual fixes are reguired here: NONE

We are done with Registry.  All files, where references to old directory names existed are now updated.  Almost…

This step is required for Vista, Windows 7/8  and Win 2008 Server systems.  For Win XP and W2K3 edit boot.ini instead.

On this step you need to re-point boot database to a new windows directory (1W7WIN) that you just moved your Windows 7.

or if your new installation is still a default one:

Replace the {…} ID with your unique ID.   Make sure you are getting a successful reply for each command.  Run BCDEDIT again to inspect updates visually.

Let’s Boot Into Our New Instance 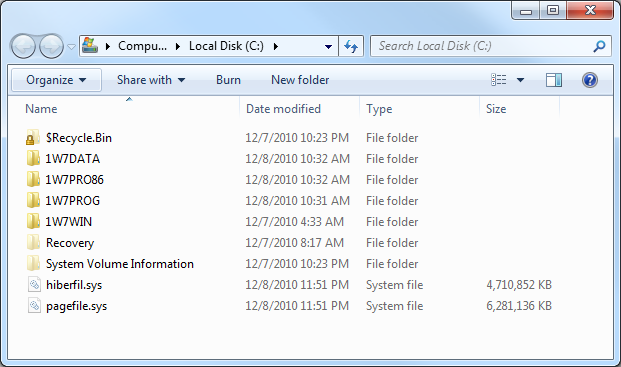 Moment of truth is here.  Try to boot into your new 1W7WIN install.

It is working with no immediate  error messages.

Now, when your new Windows 7 install with custom system directories is working, it is just matter of time to finish up some clean up.

First, check your %SystemDrive%.  Make sure that Windows did not create and directories with old names.  If it did, you miss some updates in Registry.

Second, Perform once again Registry search for C:\Win   C:\Prog   and   C:\User to make sure none are exist.

If everything works and humming, your first order of business is to backup your creation.  Get out into a parallel instance and run a backup script that will copy all 4 new system directories into a secure location, where you can use it once and again, whenever you need a fresh crispy install.  Spend time now to save hours and agonizing days later!  For a sample of a backup script see http://www.domainwebcenter.com/?p=1439, and scroll down to a section “Move/Copy Windows System Directories“.

Article that helped me to find Registry Toolkit  (for advanced users only) – http://www.bbearren.com/set7free/set7free3.html).

A very desirable Robocopy.exe utility- http://technet.microsoft.com/en-us/library/cc733145(WS.10).aspx – that can  move and copy large system folders from drive to drive without constant prompting for confirmation.

Microsoft Tool to Save and Restore Registry Security – SubInACL – can save registry security to a text file and then restore it back later.

I wrote a separate article (Save and Restore Registry Security) about this new to me feature.

How to Work with MySQL – Basic Tasks

After several days of heavy exhausting battles and sleepless nights, after testing dozens of options, after browsing many proposed Internet solutions, I finally was able to move an old instance of Windows XP on a new machine with new RAID drivers. That happened at 13:23 on December 12, 2010.  I […]