We picked teams by method of simple division, just like cells.  Two captains – Yakov and Lyonya G. picked teams one chromosome after another.  Together with late arrivals, our total count was 13 DARKs on 12 WHITEs.

DARKs defense was making some spectacular errors.  When ball seem completely out of danger, DARKs defenders would find yet another way to miss the ball, to pass it back to an attacker, or simply be run over or fulled by advancing forces.  It was painful to watch.  Marcello scored another one after a pass from Andreas.  He was completely open, and didn’t have to take an aim (3:0) on super huge goals.

Next three goals also were a work of chance and art.  Lenia Ch. twice and Misha T. made the score 6:4.  Every goal DARKs would score, would be immediately bested by WHITEs, to maintain the safe distance distance of 2 points. 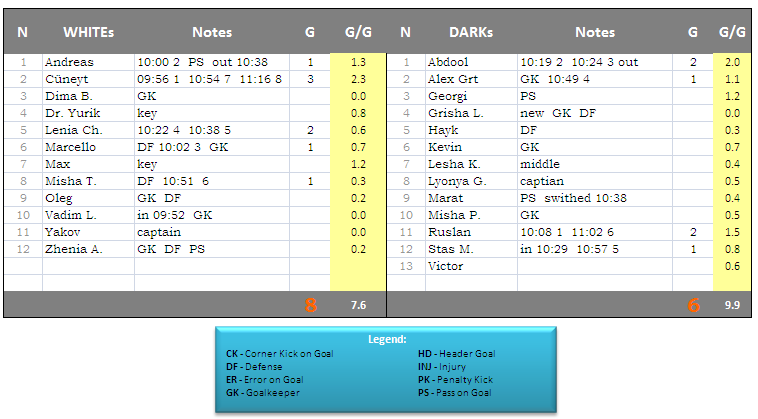 Today we will introduce a one unusual table: points-per-game.  Points-per-game indicator shows how often the person wins over total number of games played. That will show a little more fairly standing of the people with LOW-GAME-COUNT.