Type Globalist program in YouTube search and one of the top links will be an interview with Bill Gates dated 2019-02-12 (Bill Gates: The nationalist case for globalism). On second 33 of the interview he speaks of global deceases that can spread globally very quickly.  He lists this as one of the arguments for Nationalists to support Globalist along with economic instability of world economy. After that, he argues that spending American tax dollars on supporting Vietnam is cheaper than sending solders there (at 01:20 of the recording).

The purpose of this article

The purpose of this article is to compare Globalism and Nationalism and try to see if the differences are just in the percentage points of national budget spent on external help or if there is a deeper split. Let’s spend some time together describing and critiquing both camps.

Join Globalists of remain a Nationalist?

This impasse of XXI century between Globalism and Nationalism is very similar to split of XX century between Communists and Social Democrats.  Moreover, they are historically connected. Let us draw 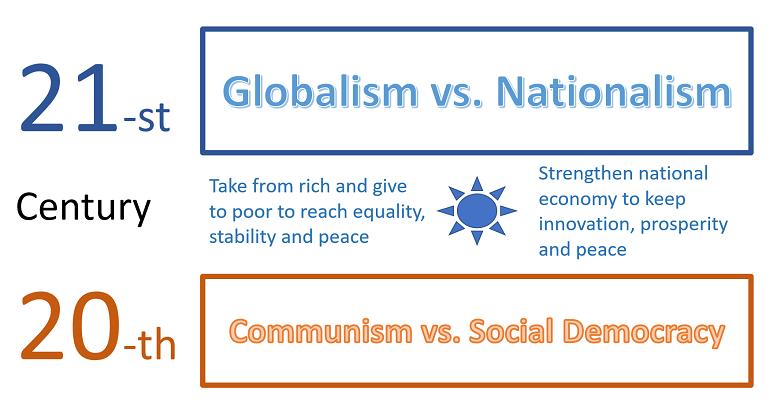 a historic parallel between XX and XXI centuries political conflicts

Side note – Why Communist’s doctrine does not work?

In all communist countries (except China) this experiment ended very poorly both for the people and for the economies. The problem is that equality kills the thirst for innovation and change. In every case, after 10-15 years of proclaimed equality people are still desperately trying to escape “equality” and communist Governments begging surrounding countries to provide bread and means of subsistence because economy is ruined. In China, communist party adopted a one-party-capitalism while allowing people and capitals to flow while remaining firmly in power.  This is hardly a model for propagation. Chines immigration to US is at all time high (Chinese Immigrants in the United States) and people do not voluntarily run away from a good thing.     Keeping above demand and convictions in mind, let us look at

Who is standing behind two camps?

Critiques of each camp of one another. The very best arguments are very often found in critique from the opposite camp.  Let us listen

What Globalist and Nationalist are thinking of one another

On the web, it appears, there is no middle ground between the two camps. Both sides are using

Vocabulary tricks to smear the image:

Events of the first half of 2020 appear to be an act of revolutionary war.  It felt as a first open battle between Globalists and Nationalists.  This time it was not limited to one country as in Britain and USA in 2016.  This time it was orchestrated in many countries all at the same time. It appears that names and colors of local political parties do not matter anymore. Forget old hotly debated questions about abortion, race, and religion. The world revolt of May-June 2020 splits voters into Globalists and Nationalists. And the split will be very hard to mend as the sides do not show any common ground to compromise.  Meanwhile, as we just saw, above the argument is really about shades of gray.  Both sides know that global problems will not wait.  But the deadly fight is about how much money to allocate for this, and who will oversee allocating these trillions.  Good luck planet Earth!