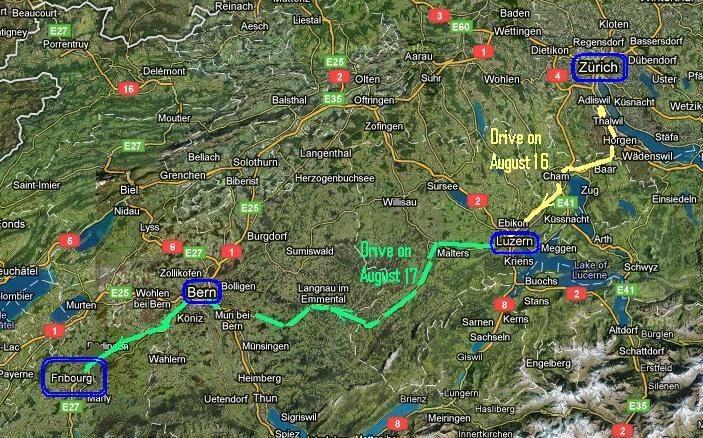 Next morning Monday, August 16 rain continued, but for us it was time to move on.

First we visited a local Migros Genossenschaft in Adliswil – their supermarket, where we had breakfast + lunch and loaded on food and water supplies for the road ahead.  We felt like we were disturbing a well-oil machine with all our foreign questions about parking and hot water and socks and American Express (which they do accept).  But we manage, and by 14:04 we paid, and were on our way.

Without a definite decision we just jumped on the highway and started driving south. Very quickly we reached Luzern. We’ve been here once in 2004, and we found a one hour parking right in the center, within sight of their famous tower standing right in the middle of the Reuss River.

The city is a nice and easy tourist destination.  It is surrounded by mountains; it has plenty of interesting wooden bridges, and long defense walls with walkways, and boat rides and even a Wagner house.  We followed instructions from Tourist Information and GPS, and we found a Lion Lodge Luzern hostel, where for 83 CHF we were given a double room, parking (can hold only 3 cars) and free Wi-Fi in the lobby.

17:03 is a perfect time to check in and start thinking about supper.  We searched for a veg-friendly place to eat on Lira’s list (Wirtshaus Schutzengarten).  We walked half of the city, we climbed the walls, we crossed the river to Bruchstrasse 20, but they were closed or out of business, so we returned back to old town and eat in KHRUA THAI place, where we were the only customers.  Marvelous!

If only they knew that customers can’t get in, because their door is getting stuck.  We were very determined to get some Thai food, so Lira pounded that door till it opened up.

Next morning Tuesday, August 17 we asked to leave our car for a coupe of hours and went to take a second look (after 6 years) at wounded lion commemorating fallen Swiss Army solders, who protected French King against revolutionary crowds.  After making a ritual round of pictures, after eating our yogurts and more, we continued our trip, this time to Bern.

By magic of GPS we took a shortcut through the mountains, instead of staying on the highway.  All of a sudden we begin climbing into the clouds and only later opened the map to see, what happened.  GPS decided that a quite little shortcut through the map is shorter than a steady drive on the road.

When we descend back to the road, it was time to take a break and eat.  Instead of looking for a service area, we stopped at a small bakery in a small village. Boy, what a surprise!  This little  bakery could be a logo for the entire trip.

We paid with cash, so I didn’t get a receipt, but I found this bakery on the Internet by a picture taken in front of the place. They are Poscht Beckeria (Hauptstrasse 24, 6170 Schüpfheim).  Super small village.  Super small bakery.  But now I know exactly, where the best croissants are hiding on the way from Luzern to Bern.

Bern met us with overflowing hotels due to a soccer game between Switzerland and England.  As far as I can confirm today, the only important game on that night in Bern was Swiss Young Boys vs. much more formidable Tottenham from UK.  To everybody’s surprise Swiss boys were leading 3:0 and won 3:2 in first leg of Champions League.

We were surprise to see local police (usually invincible) at a full alert and full visibility around the crowd sticking out of sport bar. A laud chanting crowd adds a sense of anxiety and makes apparent order of city life seem fragile.

But for us travelers it meant a quick supper (or dinner) near Rail Station in Tibits (code to use both restrooms here  is 1234) and back into the car to continue towards Montreux.  Next large city on the map – Fribourg – was unknown to us.    We exited highway, found parking under former city walls, and ventured out in search of a youth hostel.

Morning and early afternoon on Wednesday, August 18 we spent in Fribourg (Freiburg in German). This town is a perfect model for Disney World for adults. It simply has everything. It is the capital of a canton (like a state in US). It has upper town and a lower town. […]