We started at 09:46.  19 people found their way to the green field for the first game of the Spring-2012 season.  We had a lot of first-timers today.  And everybody loved the field.

Online Marat asked for directions at 12AM.   Nelson very tenderly replied at 7AM.  But neither Marat nor Nelson made it.  Strange?

But let’s first reminisce the TOTALS for the newly departed Fall-2011 season.

Ok.  What about today’s game?  Today Alex Grt and Lyonya G. were picking teams, and WHITEs got a strong offensive squad, with Eddy, and Giorgi and Victor upfront.  DARKs got a more defensive team with Kevin – Matt – Erick holding the fort.

By picking first, WHITEs got 10, and DARKs got 9 players. For the first 50 minutes or so of the game WHITEs are dominating and leading 3:1.  Bobby terrorizing the defense, and scoring fine goals. 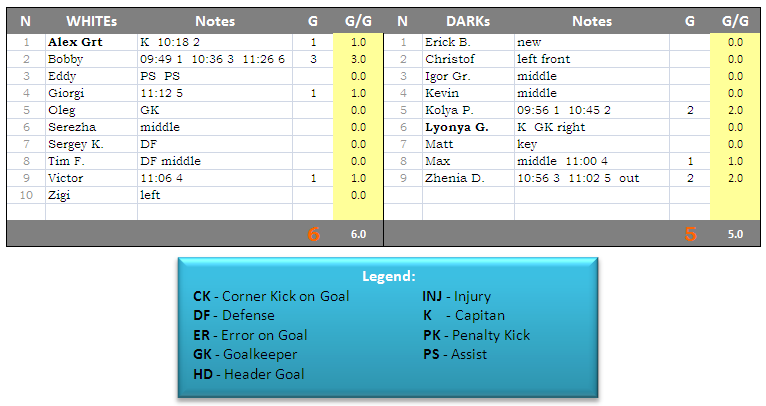 Finally Bobby – the star of the game today – leaps through several defense-men and sends a low one into the net.  It is done.