Headlines of the Day:

Very long intervals between goals.  A tremendous weight of each goal.  WHITEs took an early  lead with Vova M. hitting the target fom a great distance ( 1:0 at 09:45).

Next, DARKs took a lead with Kolya and Lyonia both scoring important goals.  It is now 1:2 at 10:03.

Next WHITEs scored 3 goals.  Andreas score 2 goals.  First on Lyonya and later on Alex Grt.  Both goals are extremely painful and unnecessary.  Both goals from a distance of over 50 yards into the empty net.  And now WHITEs are us by 2 points (4:2) at 10:53.

Those 2 goals were a wake up call for DARKs.  All of a sudden  they begin to show some character and within minutes Abdool made the score 4:4.

As the game was drawing to a close, Sasha L. one more time scored on of those impossible goals, when both defenders and goalkeeper thought that moment is over (5:4 at 10:58).

DARKs placed Ilya L. to the goals.  WHITEs had this one more incredible opportunity, when Vova M. sent the ball aroung the goalkeeper right into the net, but Alex kick the ball out, canceling his earlier mistakes on the goals.

As it often happens, if you do not score, you get a goal.  Plus Sasha, Christof and Max left.  DARKs didn’t wait long, and scored.  Most likely it was Grisha Rom., but it is not entirely certain. 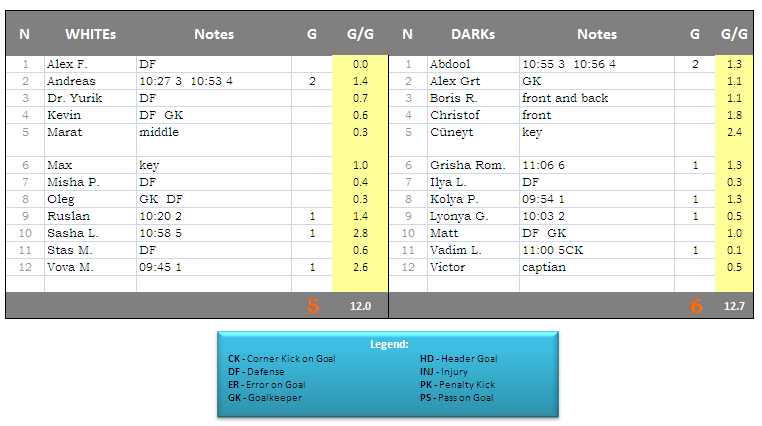 Players with 5 games or more are shown: