Vlad T. scored on Kevin from a sharp angle – what was going on?

WHITEs had all the stars in their constellations aligned:  Vova M., Ziya, Zhenia V. and Bobby.

But DARKs continued to play for a little bit more.  At 10:02 and 10:03 Lyonya G. scored 2 very mysterious goals: one from Juan with an undetermined body part, and the another from his own corner.  Lyonya served,  and Vadim L. rolled back to his goalkeeper, but ball end up in the net.  Now it was 3:5 for DARKs.

Second time WHITEs tied up the score only at 10:16.  Ziya had to score 3 goals to make this happened.  But it was an air of complete hopelessness.  Everybody new that WHITEs will win.  The question only remained – when?

And here, at this paramount moment Kolia N. decided to desert his team.  It was not interesting enough for him.  “Not interesting!”. You know the straw breaks an elephant back.  But that was not a straw.  That was at least a hypothalamus.  And that end up being a decisive factor in the game. Very, very not attractive behavior. 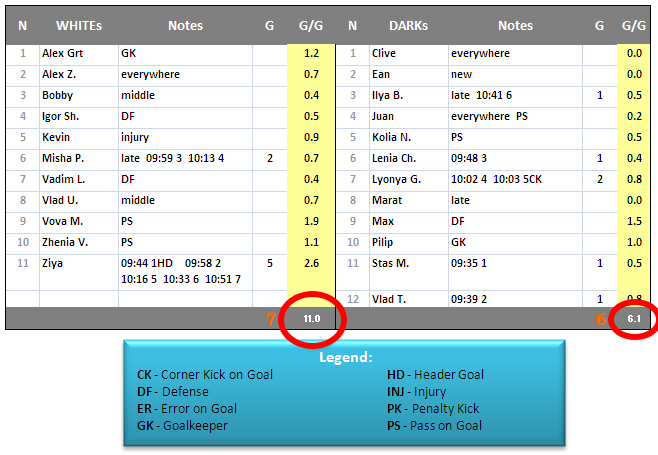 Long exhausting minutes passed, and on the last breath WHITEs barely scraped one more goal – 7:6 at 10:51 by Ziya.  But what a monstrous desertion displayed by Kolia N.  It cost the the entire team a defeat.  How something like this can be justified?