Never-the-less.   We started as one happy unisex family of 26.  And we even score 3 goals.  But it was quiet a zoo out there.  And we split.  Misha P. suggested, and DARKs went one way and WHITEs remained.

This report coves the second game.  This game started as 7 WHITEs on 6 DARKs, but Vova M. strongly enriched the mix and equalized the teams.

First goal after the earthquake was registered at 18:12.  Lou in a bright new red shirt hit the target.  Things looked bleak for WHITEs.

You wouldn’t believe it, but but 18:30 WHITEs were ahead 6:2, and Georgi already scored 5 goals.  It was just remarkable to watch.  He was all over.  He slide through the defense lines, he avoided skirmishes and just hit.  And he hit the the tagret consistently.  Simply, an eye-candy.

And that “baby fat”, that cusion of a few points that WHITEs created in the first 10 minutes of the game was just barely enough to keep the upper hand.

And then, the final assault began.  In just a few short minutes DARKs scored 7 goals to create a true panic for WHITEs.  Boris wanted to stop, but we convinced him to stay and face the music. At 19:36 score was 18:17 for WHITEs, and only 3 more minutes left to play.

And here , when all energy was already spent, Georgi gave a pass to Pawel K., and he put the final dot at the end of this sentence.  WHITEs just barely made it this time.

How was the other game?  What we will never know.  Darkness gently embraces the fields around 19:40 in late August. 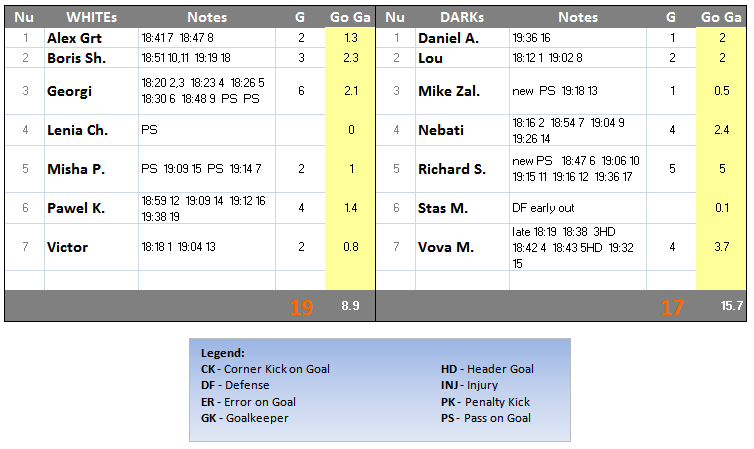