We started on a very crowded field adjacent to tennis courts.  Same said that it was 11 on 9 for WHITEs.   The grass has an opportunity to repair itself – hey, good field management.

People continued to arrive, and “internal discipline” prevailed.  Instead of ruining main game, late arrivals form their own 4 on 4 game, and they also have fun on the side.

The main game proceeded 10 on 10, when Andrey S. (just arrived from Vladivostok) switched for DARKs.  By that time score was already 1:0.  It was a very important goal for Zhenia V.  We lost count, how many games he played goalless.  But today it was an important comeback for him.

Culminating point arrived at 10:25.  WHITEs scored a goal (Zhenia V. second goal)  Stas left.  Zhenia A. switched for DARKs.  So now it was 4:3  and DARKs got one extra player.

Who was holding the defense lines for WHITEs?  Surprisingly Victor and Igor Gr. put a lot of effort to maintain some order in WHITEs defense.  DARKs were mounting attack after attack.  And it felt like one defender constantly was too late for the action.

DARKs  quickly equalized.  Lyonya G. gave pass to Andrey N., and he was quick to hit the target – 5:5. 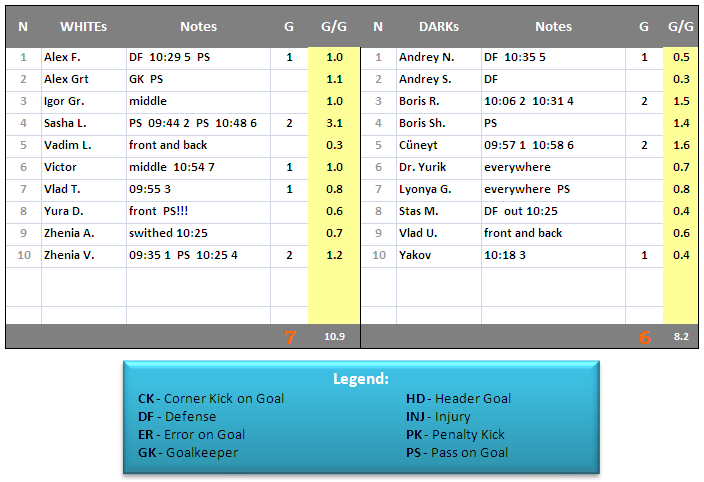 Long minutes passed.  Energy began to run out.  Next goal could become a decisive one.  But who would score the next one?  Finally Sasha L. receives a pass in front of Vlad U. goals and calmly rolls into the corner – 6:5 (10:48).

The tropical rain and storm started at 14:05 on Saturday afternoon.  Let’s see, if Sunday game will survive under the pressure.