Very short game lasted only from 09:30 to 10:56.  Either hot temperature or players’ age begin to show up on the field.

It was all about a warning signs. Very early in the game, at 09:43 to be exact, Sasha L. had a “better than penalty” opportunity in front of the goals.  He broke through the defense lines and was advancing on DARKs’ goals. Everybody stopped because it was a sure goal.  But Lyonya G. somehow blocked the shot. That was one ugly warning sing.

Despite that, WHITEs quickly gained a 3 point lead with clever passing and calm execution.  By 10:23 score was 6:3 after an impossible breakthrough by Max.

Yura D. scored 4 goals and “one-and-a-half” assists.  Yakov got a sure pass from him, but ball did not go in.  In an exclusive interview after the game Yura D. dedicated his goals and assists to forthcoming Father’s Day and impending birthday.  He didn’t specify to whom he dedicates his last magnificent header goal dispatched from Sasha L.

As quickly as they gain, they lose.  In less than 30 minutes it was all over.  We saw 6:9 with Amr, Cüneyt, Georgi and and Leyonya tearing apart nonexistent WHITEs defense.

Chris P. had to switch for WHITEs as Stas M. and Yura D. left.  He was witnessing the amazing deterioration of WHITEs defense, and he exploded.  Amazingly, the recorder was running during his tirade of expletives.  To be fair, it was a well worded, clever outburst.  We most likely will use terminology suggested.  Plus we’ve got a very good and timely apology.  So no one can complain. 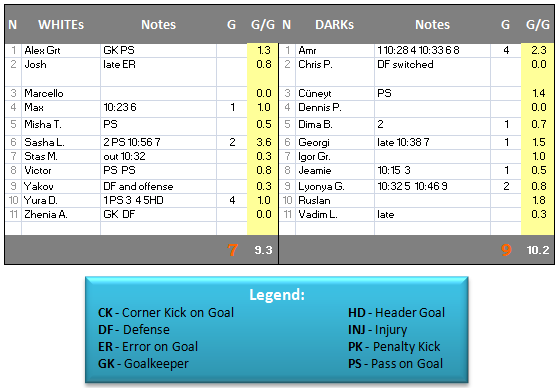 From a remote capital city of Moscow Dr. Yurik is holding a leading position in a Summer season competition.  Vadim L. has an opportunity to jump ahead tomorrow.  Several others are right on their hills in a fair pursuit.

As you can see, distance between the first and last place is almost impossible 7 points.