Rain was not a factor – it stopped completely for the duration of the game.

Game lasted from 09:43 to 11:31.  Rain started promptly a few minutes after players left the field.

What do you think about 33 goals in 99 minutes.  Sasha L. scored 4 headers.  This fact alone is a new record for our league, but it was nothing in comparison to 11 (eleven) goals in one game.  Yes.  Sasha L. scored total of eleven goals to bring his season total to 23.

This game unfolded in our classic thriller scenario. First WHITEs “kicked it” with an amazing 10:3 lead by 10:08AM.  That is first 25 minutes of the game. Young adults Mike R. and Niko supplied the team and each other with enough enthusiasm after a night of partying.

Then Lyonya G. appeared.  His wife was glad that game was canceled for once, and he volunteered to bring kids to Gymnastics.  At 10:11AM he secretly entered for DARKs.  That was the beginning of a second act.  Now DARKs scored (wait for it …) 8 goals in-a-row.  Very impressive entrance by our Beckham.  It must be a new haircut.

By 10:43AM score is 10:11 for DARKs with last goal by Yura D., who bates the goalkeeper far away from the goals, then turns around and sends a “messenger” right into the net.  That is another 35 minutes of the game. 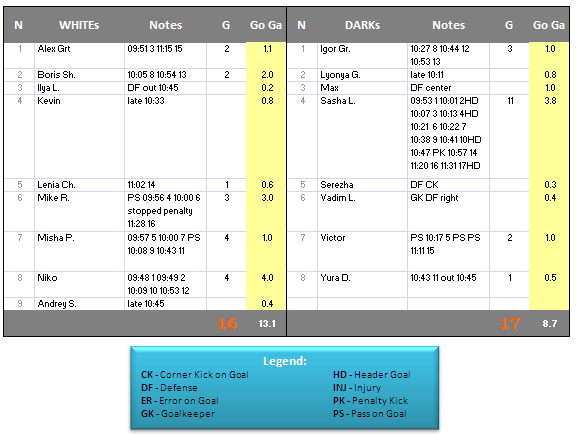 To add one final triumph to his success, Sasha L. scores a header, a high ball above goalkeeper, and a goal number 11 for the game.  Amazing, legendary, triumphant.  What a game!  What a story.