Last game lasted from 09:40 to 11:16.  It felt predetermined and fixed.  No individual effort could change the final outcome.  22 players participated, but Stas M. had to leave almost without touching the ball.

Let’s start with season totals.  Win / Loss indicator and the season itself goes to Dr. Yurik with 19 points in 27 games:

Totals number of goals scored in 27 games was 452.  Here are the 20 most scoring people with over 7 goals total:

Looking at our regular players with 8 or more games, let’s note Lyonya G., who propelled himself out of negative territory at the very end of the season. Also, only Kevin has more points than games, which shows a new more fair way to track leaders. This table is sorted by Points-per-Game:

Finally, about today’s game.  In all its glory, the game only had two directions.  From start to 0:2 for DARKs.   And from that to 12:4 for WHITEs.

And the game itself was very even and fair.  Both teams were attacking, but only one was scoring.  It is hard to explain the final result: 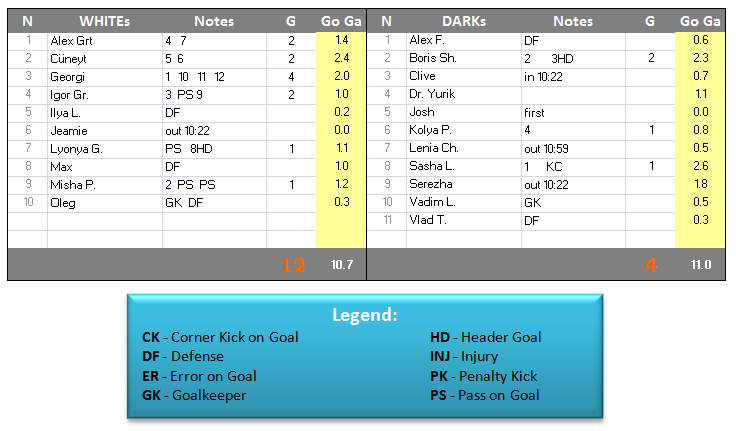 And the next installment of our membership list  from 61 to 70: