We are not changing anything yet about our Wednesdays.  But start thinking now about those dark and gloomy Wednesdays after work, when they turn on Winter time.  We will return to that topic of early morning Wednesday’s on October 31, and  I bet more people will be interested then.

Today we started at 09:18. DARKs opened with 0:2 lead in a fully-loaded 12 on 12 game.  Goal number 2 assigned to Alex Z., but it was actually mostly Arnaud effort in front of the goals.  Anyone from DARKs can claim it.  Who did it?

WHITEs continued with 7 goals, and it seemed like a done deal with 7:3 lead. Both Boris R. and Boris Sh. were performing little magic show.

Ilya L. noticed that today was a day of picturesque goals.  And that is true. Despite very good defense efforts (Arnaud, Ilya L. and Zigi for WHITEs and Alex Z., Dima B., Igor P. and Zhenia A. for DARKs), we saw all kinds of beautiful goals. Boris R. supplied 4 passes and crosses, Ilya L. gave 2 passes on goal (including one header) and Kevin returned ball to Marcello to score. 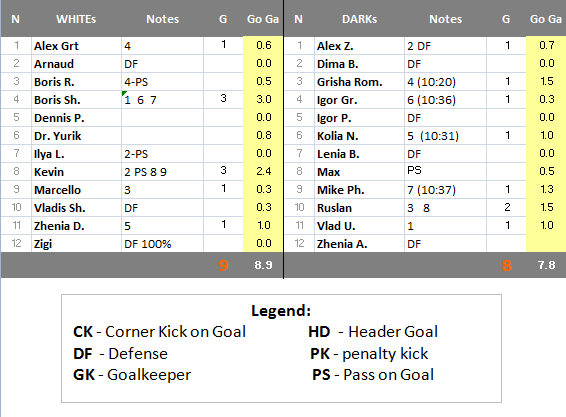 Note that both Boris R. and Boris Sh. are very high on the evolutionary tree bellow:

Extremely interesting competition is at the top of the Top Scorers list:

Note that Boris Sh. is holding his amazing 3 goals per game productivity.

11 people from Yahoo! Group visited GAME RESULTS yesterday. Let’s continue the experiment. 09:29 – We started this weekend game number six in a very unusual setting.  Our core people started on a smaller set of goals and the rest of the crew remained on a vast field with a […]

Playing the Ball While on the Ground

Summary:  There is no such foul in the Laws of the Game. What Soccer Referees are saying? This material is quoted from http://www.askasoccerreferee.com/?p=149 There is nothing illegal, by itself, about playing the ball while on the ground. It becomes the technical foul known as playing dangerously (“dangerous play”) only if the […]