Going Nowhere, Aiming for Nothing

Instead of going to the forest, to my favorite bog, I stayed home to write.  That is in accordance with principle “Going nowhere, aiming for nothing”.  Instead of fighting traffic, biking through the bumpy path and covering myself with a bug spray from head to toe, I just took a pen in my hand and begun drawing these characters on paper. 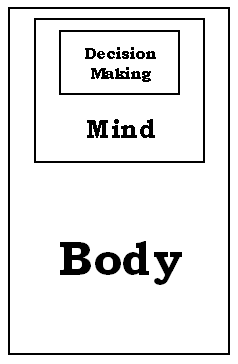 Who does that?  Something is working on your body and your mind to make them faster, leaner, smarter.  What is that something?

Who Works on Decision Making?

But this is really irrelevant for our conversation.  Let’s just remember that both body and mind are subjected to change and change is propelled from within. Decision Making on a Pedestal

To give up “I”, one needs to understand the very “I”.  In a rigid world of cause and effect, decision making is the unique element of flexibility.  It is what makes each and everyone special.  We are not just rolling in a gutter of destiny. We are making decisions. Decision making is “I”.

If a person is not satisfied with current situation, it means either one of two things: either requests have not been issued (by body or mind), or decisions have not been made to that effect.

Religion should help a person in a difficult situation to make a decision.  Religion should provide guidance.  Ask yourself, how different religions approach decision making for their followers?  Through commandments. Usually through negative commandments: do not harm, do not lie, do not steal and so on.

To be alive one needs to think.  It is your first move.  You are what you think. Before words and before actions comes the thought – the thought of “Self”. The thought is everything.  It is an emotion, it is a vision, and it is everything around you.  Try to […]

This next piece of thought is a bit untested. What should you answer, if asked “Are you a religious person?” I would go with an immediate clarification:  “Do you mean, if I believe in supernatural, or if I believe in survival of the soul outside the body?” If the questioner […]

On the Way to a Higher Ground: A Perfect Non-Smeling World