Last time Georgi waited half an hour on sidelines; today new guy Michael Za. did not.  Explanation could be probably found in the status.  Georgi was like a heavy metal star.  Even a little bit of Georgi could through the game out of balance.  Any other explanations?

Today’s game lasted very close to 2 hours straight (09:32 -11:28).  Weather was something to dream about -warm, sunny and green.  By 09:37 Dr. Yurik scored a first header from Erick, but DARKs were gathering their strength.

Ily, Georgi, Nebati and Sasha L. and Serezha all gathered to form a very powerful team for DARKs.  So, everybody was predicting an easy win for them.  WHITEs also put together a number of stars of the first magnitude: Amr, Boris Sh., Dr. Yurik, Erick, and Victor.

However, Dr. Yurik scored a second header (pass from Igor Go.) at 10:28, and Stas M. rolled a low powerful ball into the net from his favorite slight left angle position (5:4).

And all this time Boris Sh. did not score, and was not particularly visible on the field.  Who remembers a game, when he did not score a single goal? He gave one pass to Victor, but goal was disallowed due to a prior stop. 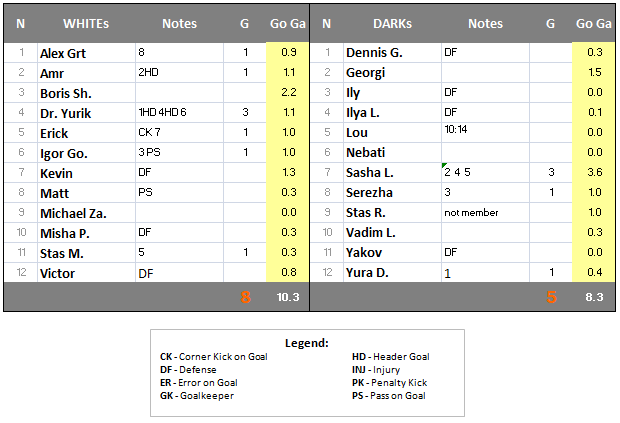 Here is a complete 85-rows long list of all players, who played in 20 weekend games of this season:

Sasha L. managed 3 very important goals today.  Ruslan and Kevin are not that far behind.