First 2 goals (18:13 and 18:19) were for WHITEs.  Boris R. confirmed his title of Icebreaker, slash defense breaker.  He was getting through defense and doing his thing.  And Yura D. received his very long high pass in front of Vadim L., stopped the ball, turned around and scored – 2:0.

Both teams kept attacking, but DARKs were spectacularly unsuccessful in their efforts.  Meanwhile WHITEs begin to build a steady pressure in the offense.  From 18:27 to 19:14 Yura D. and  Daniel A. scored 6 unanswered goals one was more beautiful than the next (8:2). 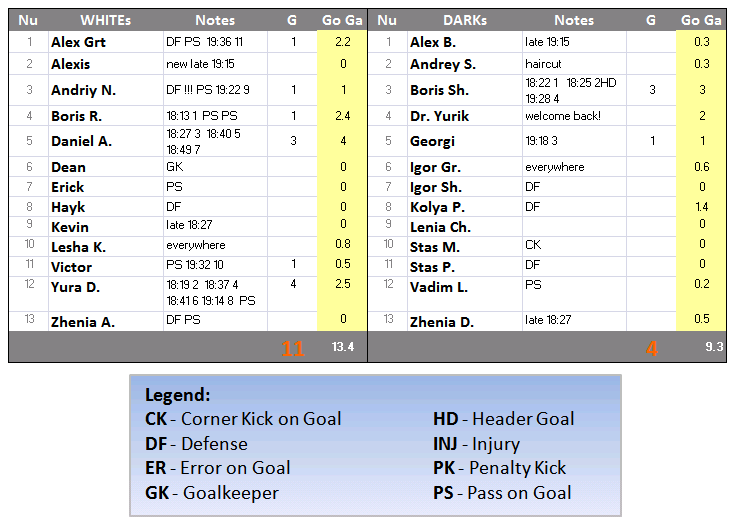 Only at 19:18 Georgi finally came through with a good straight shot into the corner (8:3).

At 19:22 Andriy N. (this is not a spelling error) scored a goal after a fault near the box.  The “wall” was apparently placed incorrectly.

Let’s emphasize the importance of good goalkeeping rotation in the team.  When everyone participates, it remove stress and tension inside the team.  It is very good, when each member feel the obligation to contribute.  After all it is the team winning, not the individual players.  Only Alexis (new) did not stay on the goals as he started very late in the game.