12 people played one hour and 15 minutes.  It is not darkness, it is not rain that stopped us.  It was a shear exhaustion.  Not one will remember the rain on a strong perfect green.  We moved two times to find absolutely the best spot.  We played on normal goals, and WHITEs started down 5 on 6.  Hayk equalized teams only at 18:41.

Dominance fluctuated in this game all the time.   First Pawel K. lead DARKs to a 0:2 lead.  Then, Lesha K. and Christof kept passing to  each other, and brought the score to 5:2 for WHITEs.

Then Boris R. gave four passes-on- goals.  That brought the score to 5:8 for DARKs.  That was a very easy and very dangerous way to obtain a lead.

Christof used this easy-breathy attitude to score goals 6, 7 and 8.  No one really believed in what is happening, but DARKs begin to make terrible mistakes in front of the goals.  Very soon score was 14:10 and 15:11 for WHITEs.  Lyonya G. announced that the game will end in 11 minutes and it was 19:19 on the clock.

Very slowly, very deliberately, DARKs begin to mount one attack after the other.  A new Andrey S. magically stopped allowing any more goals.  Now mistakes were made by WHITE defense, and WHITEs goalkeeper.  Last eleven minutes turned into a nightmare for WHITEs.

At the very end DARKs won not by one, but by two points, and by that time only 5 people left on each side. 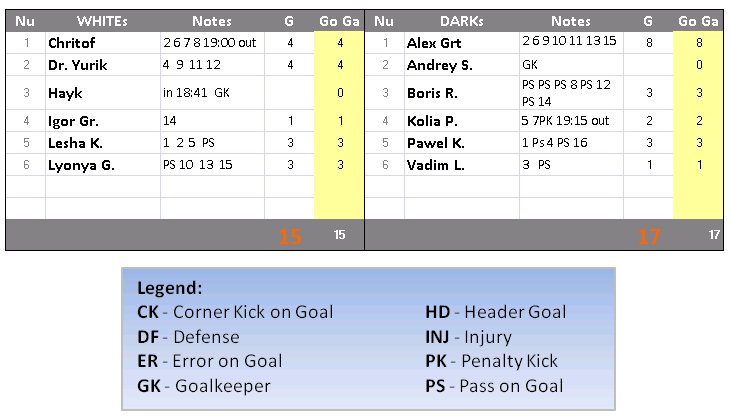 This was the very first Wednesday game of the Summer  season, and there are no totals other than these numbers above.