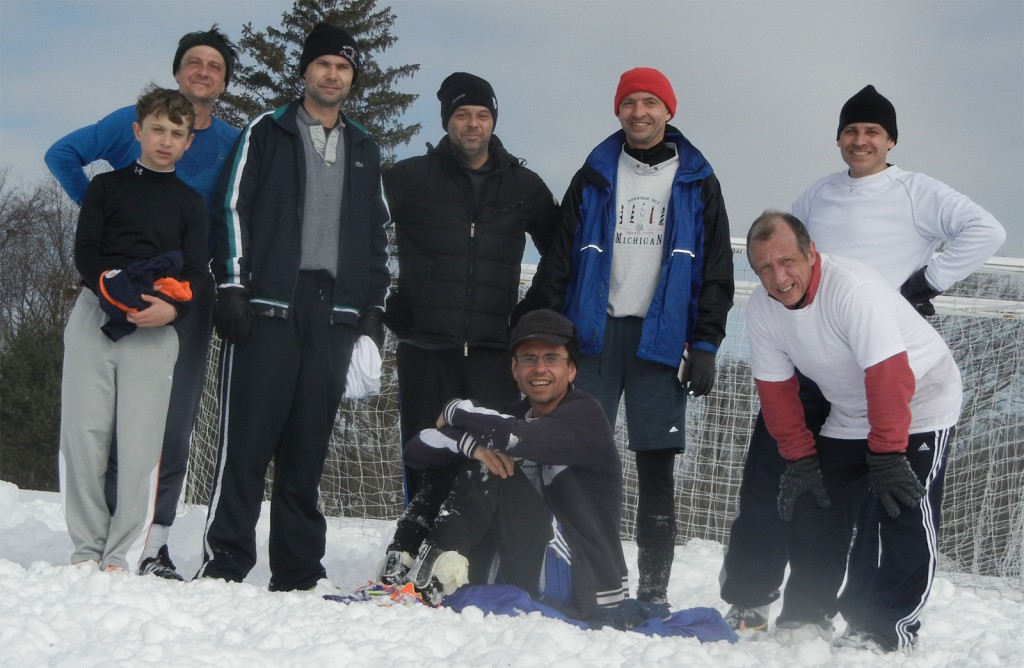 During last several weeks we held fantastic snowy games with real joy and pictures at the end.  But sadly, we did not count those 3 games into season statistics.  May be tomorrow?  Now it is time to review, what is the driving force behind these events?  – The people were the driving force. Andrey T. brought with him a number of new people, and together with our regulars we created a new pretty competitive environment.

The weekend of February 15 and 16 was a complete lost.   People were just digging out from double snow storm, but this is all an ncient history now.

On Saturday, February 8 we played 6-on-6.  Oleg said that wind made this the coldest out activity he ever undertook.   Pasha and Zhenia T. team won by a large margin.

On Sunday, February 9 we played 4-on-4 and it was cold and snow was like a sand on the beach.  Dima’s  son Pasha N. braved the snow equally well with adults, and mastered the scoring on the snow routine to the perfection.  Zenia’s T. team won decisively again despite a competitive battle.

On Saturday, February 22 we played 6-on-5.  This time the snow was high, but weather was warm and sunny.  Snow quickly compacted into a decent leveled surface, and tomorrow it will a be fantastic foundation for even better game.  Sorry snow, it is time to go.

Tough weather conditions brought to the spotlight our most visible people – Dr. Yurik, Lyonya G., Oleg and Zhenia D..  These people  can plan ahead, feel comfortable in the hostile environment, and able to perform in snow and wind.  Sadly, we do not see our other titan – Vadim L. – as often as we hoped for.  But we are growing a new cadre of though players, and watch out Spring – Newton Pickup is going to get you.