The game was a success story for middle of winter in New England. But since November 20 WHITEs didn’t have much luck – one tie and four losses. Tomorrow is the last time this year we can satisfy Stas M. request to win.

Today Oleg brought 7 new people, and we made a mistake of letting them pass in front of the goals. Plus, it was a star-game for Lenia Ch. who remained super strong all 104 minutes of the game.  Plus he reached a dream level of one goal per game.

WHITEs looked strong on paper, but just couldn’t deliver. Let’s count both good luck and exquisite goalkeeping (Alex B. and Oleg). But most of the balls wouldn’t even reach the goalie. DARKs defense was impenetrable. DARKs defense was stable, and they didn’t know that we are throwing our best troops to destroy them. They thought we are sending out regulars, and they calmly did their job. 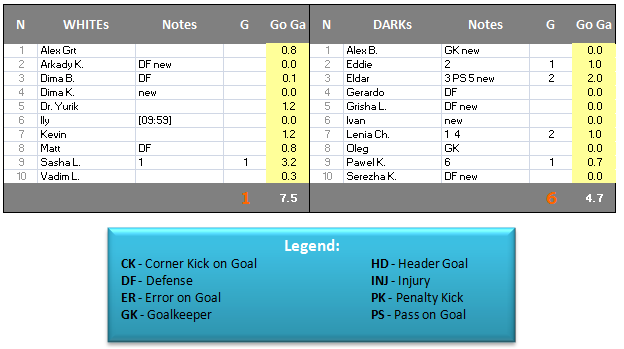 We started at 09:45 on a beautiful green lawn. WHITEs still had high hopes at 10:32 and 0:4. At 10:56 Eldar and Pawel scored two goasl in a quick succession and all hopes were taken away. Now the task was just to score a single goal. Just to break the dry spell.

The game stopped at 11:29, when Sasha L. broke through one-on-one and calmly scored, as if it wasn’t the most important goal of WHITEs.

Sasha L. is now within one goal from reaching the top with a solid 3.2 average:

Christmas celebrations continued with a photo session and ceremonial toasting to good time ahead. Cheers!

27 games down, one game left.  Vladis Sh. can only wait for tomorrow’s results.  Boris Sh. can show up unexpectedly and just conquer the pedestal.